In the Spring of '03 I found out my wife was going on a business trip to NYC. And I would get to go with her!

I had never been to NYC, but my Grandmother and a bunch of relatives grew up there (My Grandmother had a thick NYC accent until the day she died) and so I heard plenty of stories about the city growing up. NYC seemed like Oz me, it honestly seemed like someplace I would never get to even visit. As laughable as it seems now, my mind was so closed going to NYC seemed like flying to Mars.

As the date rolled closer, I realized I wanted to tour Marvel Comics. I looked online and did some queries, but everyone told me it was impossible, Marvel didn't do tours anymore.

But I had my ace in the hole, C.B. Cebulski's business card he had given me back in the previous summer at San Diego, he had told me to keep in touch.

The story of my visit is told in more detail on my website. http://www.scottsackett.org/

Nowadays, everyone trying to get work in comics knows about C.B. from his years as Marvel Comics Talent Scout, but at the time he was an assistant editor on The Ultimates.

Over the years, I've had many 'lucky breaks' meeting C.B. at this point was a huge lucky break.

I resolved to take advantage of my visit to Marvel by taking some samples and I drew these 2 stories, a Spider-Man and a Thing story, both simple stories I made up.

This was a turning point in my drawing comics, I spent several hours that afternoon at C.B.'s desk and he went over these pages in detail. He explained storytelling and how to lead the reader through each page. I didn't get a job, but I got a great education in creating comics! 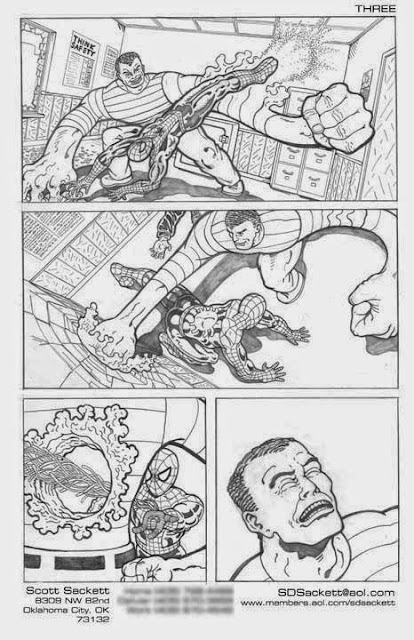 Posted by Scott Sackett at 8:39 PM No comments:

For years despite wanting to draw comics I never drew comics. I drew sketches and pin-ups, anything but actual comics. I had the idea that how you 'broke into' comics was to mail in samples and keep mailing them in until you proved your desire or fortitude or something. So I put off sending anything off. I felt like once I started sending work in I had send in samples every month and I didn't have that in me, not yet. But the 2002 had changed all that. Meeting C.B. Cebulski and getting good feedback from him had fired me up. It all seemed possible, I could make this happen. C.B. had given me his card and I would make it happen. But I did the worst thing I could possibly do, I didn't follow up with C.B. Oh, I drew pages and sent them off, but I didn't tell him who I was or how we met or anything. I just sent him the same letter I sent every other editor. Dumb move and only a little good luck would fix that. Here's the next sample I sent off. This seems to me to be a step backward from my previous art and I was tempted to switch the two and show I got better and better all the time. But I know this was done later and art isn't digging a ditch, with continual progress. It's something you keep against all opposition even if sometimes the thing holding you back is yourself.
Posted by Scott Sackett at 5:19 PM No comments:

I'll always think of the 2002 San Diego as kind of a turning point for me.

In 2002 the SDCC was a lot smaller then it is now. I went to the con with two friends, Dave Nelson and Richard Jenkins. As an example of how much different the con was, the three of us split a hotel room across from the con (behind the new ballpark) for $69 a night!

This was an amazing time to be attending the San Diego Comicon and I am grateful I was able to attend it before it got huge.

Dave is host of Better Than Fiction, a podcast I cohost and Richard was drawing the comicbook SkyApe. Richard and I both brought art to show to publishers.

If you go to a comic convention now, to get your art looked at by a major publisher you drop copies in a box. They will look through them and pick the people they think are close. These go onto a list and if you're on the list you get a time and you get ushered back in the bowels of the convention center to a one on one meeting with and editor.

In 2002 it didn't work like that. You stood in line or ran to a table to sign a list. Then you got to meet with an editor, sometimes with a huge crowd around you while they talked about what you needed to work on.

I much preferred the old method. Yes, it was a pain and sometimes you stood in a long line, but I got valuable feedback in those days and it felt much more satisfying then just dropping a envelope in a box.

I understand why they do it this way, but I liked the old way.

I had a pro badge based on my work for Acid Jaxx, despite never getting paid or published it qualified me for a SDCC Pro Badge for several years after that. Ironically, I've saved way more in admission to cons from that work then I was ever going to be paid!

Since I had a pro badge I was able to get to the Marvel table and get on the list fairly quickly. Richard and I both signed up for a late afternoon review. At the time Marvel was in or near bankruptcy and so their booth consisted of an 8ft table mixed in with the other small press booths. I don't think they had any sort of banner. It was basically a spot for their talent to do signings and them to look at portfolios.

When we went to our review there was a few people in front of us. C. B. Cebulski was looking at portfolios, which was good because (you may remember) I had gotten a kind note from him for my last mail in submission.

When we went up to the table, C.B. told us he had to leave for a panel and asked if we could come back later in the show.

To make a long story short we went back about 30 minutes before the show closed and he looked at Richards first. I don't know what he said, but I think it was positive. Then it was my turn and he really seemed to like my work. He pointed out some stuff to work on, but he gave me his information and told me to keep in touch!

I guess I thought he was being nice or something so, while I was very happy, I didn't really make much effort to stay in touch after the con. I sent him work, but I just sent him the same form letter I sent everyone else. This was dumb thing to do.

However, the next spring something I never thought would happen  happened and that all changed.

Posted by Scott Sackett at 11:57 AM No comments:

After my Daredevil sample, I decided to draw a Wolverine sample. Not sure why I picked Paris, but it seemed like an exotic spot for a comic sample. I also like the old style, but cutting edge at the time, zip drive. I was trying to find my 'style' and I think these pages showed a lot of Frank Quietly influence on what I was doing. I don't remember how response was, but I know I got a response from a new to Marvel Assistant editor who went by the initials C.B.
Posted by Scott Sackett at 8:18 PM No comments:

At some point it became obvious to me the Acid Jaxx comic wasn't going to become at real thing and I had pretty much given up on getting the 3d animation job so I resolved to turn my attention back to drawing submissions. I didn't really have access to any scripts, so I modified the Spider-Man script I used for San Diego and drew this. I tried to follow the advice I had been given in San Diego. For example, I started collecting books on New York City and used that as reference. Also, I specifically remember Mark Chiarello (of DC Comics) telling me to show more 'height' in the last panel, so you got sense of the danger. So I tried to do that. I don't remember how the response was to this sample. I know at the time I'd send out 50 -60 sample packets and get back 7 or 8 responses. But the real important thing about this sample was I got back in the habit of producing work.
Posted by Scott Sackett at 7:55 PM No comments:

I guess the tryout went well because sometime in the fall of 2001 I was offered the job drawing Acid Jaxx, starting with issue #2. It was awesome, my first paying comic job! I was excited! The only problem was the writer didn't have the whole script written. He was sending me several pages a month.

In the end, the project ground to a halt and I stopped getting script pages and he stopped answering my email. I think he last email to me was something like. "I would never bail on an artist. I am having trouble finding an inker. I will contact you with the inkers address soon." And I never heard back.

However, there is more to this story and later on Acid Jaxx will resurface.

These are all the pages I could find, but I think there may have been a few more. At the pace we were working this kept me busy fall/winter of 2001 and 2002.

Posted by Scott Sackett at 1:39 PM No comments:

Last post I talked about trying to learn 3d animation for a job someone was dangling in front of me. Well the job never materialized and after over a year I realized that it was never going to happen. I think 9/11 may have had something to do with it, who knows?

In the fall of 2001 after the 'job offer' seemed to vanish I spent a lot of time posting art in online forums for comic creators. Through this I was approached about drawing an ongoing comic for a very small company called Destiny Valley.

I was only offered $20 a page, but I didn't care. I was excited to be offered the chance to work on any comic, much less making a few bucks. I've never worried about the money, I figured if I did good work everything would work itself out.

To get the job I had to draw 3 pages of a tryout of a character called Devine Wraith.

Posted by Scott Sackett at 5:13 PM No comments:

Scott Sackett
Scott Sackett has drawn over two dozen comics for companies both in the United States and Europe. His clients include Viper comics, Domino Comics, Grayhaven comics and Pronto comics. Scott lives in Oklahoma City with his wife Michelle and their Shih Tzu, Princess Peach His website is www.scottsackett.org He is on Twitter @Scott Sackett and Facebook/ScottDSackett